In response to economic disruptions caused by the COVID-19 pandemic that have shaken the very fabric of the building industry and caused a dramatic rise in the cost of materials, The USDA is calling for greater efforts toward an independent forest economy. But what does that mean?

According to the National Association of Home Builders (NAHB), the issue of rising prices in lumber goes back to 2017, when the Trump administration enacted a tariff on softwoods coming from Canada, which supplies much of the United States’ lumber needs, but the pandemic has really taken its toll.

Nationally, as of mid-February, lumber prices had risen 170% over the previous 10 months, which has caused builders to raise prices. This in turn increased the price of building a new home by thousands of dollars, according to the NAHB.

And it’s not just lumber that’s driving up those costs. Bourbeau reports that the cost of one roll of electrical wire went up from $65 to $125 in a little over a month. This is in a time when the average house uses 15 rolls of wire.

Steve Maskell, an independent contractor and former logger from Eden, says that shipping over distances and across borders also alters the price of materials.

“The border closure really had an effect on free trade. We couldn’t go across to pick up supplies. Also, a lot of our trees go to Canada and the Canadian government subsidizes their industry. We ship over to them and it’s processed and is sold back to us for less money than what we can produce ourselves. That’s why the demand is so big to go to Canada,” he says.

On the flip side is the demand issue. Summer DIY projects affected the pressure treated market in a huge way.

“You just couldn’t get pressure treated lumber. We were getting huge delays because everyone was home and they weren’t spending money on anything except renovations,” says Bourbeau.

Consequently, demand has been way up and supply way down.

However, the lack of product and the lack of existing homes has left shoppers in a pinch. The only option he says is to build new homes. But 98% of the time the price is marked out of a consumer’s range.

“What’s happening is that the market is so hot that you’re seeing people overbidding or making offers over asking price and then proceeding to not even ask for home inspections,” he says.

The result is a cash deal, according to Bourbeau.

“If someone is needing financing their offer won’t be accepted because of the contingency of financing,” he says.

What is the solution?

To solve current problems, the USDA is pitching the idea of an independent forest economy through the use of mass timber, a general term for engineered wood products used in commercial construction.

“It involves sticking pieces of soft wood like pine, spruce, or fir, but also sometimes deciduous species such as birch, ash, and beech together to form larger pieces,” says Adam Kane, executive director of the Fairbanks Museum, which has recently secured funding and is building an addition called the “Science Annex Workforce Development Project.”

When completed the three-story, 6,000-square-foot upgrade will feature classroom and exhibit space, a stair tower and four restrooms, and will be made up completely of mass timber.

“The idea is to drive economic impact on Vermont’s forestry industry,” says Kane.

But the most common form of mass timber is called cross-laminated timber (CLT).

“Lumber boards that have been trimmed and kiln-dried are glued on top of one another in layers, crosswise, with the grain of each layer facing against the grain adjoining it,” he says.

Stacking boards together in this way, Kane says, can create large slabs, up to a foot thick and as large as 18 feet long by 98 feet wide but also produce fewer emissions and less waste than normal construction.

“Slabs of wood this large can match or exceed the performance of concrete and steel. CLT can be used to make floors, walls, ceilings — entire buildings,” he says.

According to the USDA, Vermont has 4.5 million acres of forest comprising 73% of the state, but there has yet to be a mass timber building constructed in the state and that’s what the Fairbanks Museum is hoping to move the needle on.

“It’s a chicken and an egg issue. You need supply and demand right now. We saw this as a way to create an ecosystem where more mass timber can be built.” says Kane. “This project drives sustainability and creates something that will last for a long time.”

The exhibit — which will cost between $2.25 million and $2.5 million — is set to break ground in June and open in March.

Margo Sherwood moved to the beautiful state of Vermont with her husband in 1969. Shortly after moving to VT, she began assisting people with their journey of buying and selling properties. She, along with her millennial agents - Tyler Hull, Tami Lantz, and Christopher Keller - continue to work 7 days a week to make your dream a reality! They know the ins-and-outs of buying and selling property in the digital age and they're happy to help both native Vermonters and out-of-state home buyers & sellers with their real estate needs. 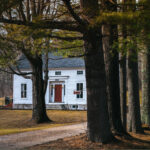 12 Must-Do’s When Moving to Vermont

Image via Pexels If a relocation to the Green Mountain State is on your horizon, it’s time to start getting things in order! You’re about to move to one of the most scenic places on earth and meet some of the nicest people you’ll ever meet. But for your move to go smoothly, you will […]

See what the USDA is proposing to mitigate rising building costs

By: Kris Lantz In response to economic disruptions caused by the COVID-19 pandemic that have shaken the very fabric of the building industry and caused a dramatic rise in the cost of materials, The USDA is calling for greater efforts toward an independent forest economy. But what does that mean? According to the National Association […]